I don’t know about you but I know I haven’t cracked this “work/life balance” thing. Like many of you I am busy at work, dealing with patients, staff and generally running the practice as well as keeping an eye on how many UDA’s have been completed as the end of year is looming. Home is equally as busy with normal day to day stuff; the after school clubs, book week and even St David’s Day celebrations last week!

So many of my friends and family thought I had completely lost the plot when I announced I was going to Greece for a weekend to provide emergency dental treatment in a refugee camp. I signed up five months ago with the dental charity Dentaid who work with Health Point Foundation to provide dental treatment for refugees. The process was relatively simple, a few emails & forms to fill in and a phone call with Dentaid to ensure you know what to expect and iron out any queries you have. All of that was done before Christmas so last week it was a bit of a shock to realise the date had actually come round!

And so it was I found myself in Gatwick departure lounge early on a Friday morning meeting two fellow dentists, Rob & Niyi, who had also signed up for the weekend. The three of us flew to Thessaloniki and, after picking up the hire car, made our way to the hotel.

That evening we met up with the coordinators working on the ground in Thessaloniki and two other dental volunteers. The seven of us came from different backgrounds professionally and from different countries & cultures but it is amazing how much we had in common. Hassan & Rayyan, the coordinators, both spoke Arabic and were also dentists. They worked tirelessly over the Saturday & Sunday setting up the clinics, organizing patients, assisting with treatments and were always on hand to help translate & communicate with the patients. Both had been working in the role for a few weeks and planned to stay on for another two months or so.

The two other dentists had volunteered via Health Point Foundation. Ibrahim was from Australia and had arranged his volunteering to coincide with a ceramic aesthetic course he had attended in Athens earlier in the month. Gavin was a semi-retired Oral Surgeon from the Manchester area. Get two oral surgeons together and it’s not long before you start comparing notes – we had an interesting conversation regarding Eagle-Beak forceps!

The refugees we treated had been relocated out of the camps into a disused warehouse and a hotel. On arriving at the sites our first job was to move all of the kit from the van to the allocated room and set up the “surgery” with two folding massage tables as the dental chairs, a clean kit area and a container for dirty instruments.

The seven of us quickly became a team. Whilst we were getting everything ready Rayyan would make a waiting list of all the people who wanted to be seen and would start spreading the word amongst the refugees that we were there for the day to provide treatment and advice.  Hassan made sure everything was set up correctly and Gavin (having already been working as a volunteer for five days) also knew how the system worked in terms of getting everything organised.

Rob, Niyi and I provided the treatment for patients, whilst Gavin moved between us providing instruments, materials, advise and then cleaning up after us – we couldn’t have asked for a better assistant! Ibrahim was worth his weight in gold in helping us communicate with the refugees. This went beyond merely translating what we were saying as he also chatted to the patients and their families and reassured them about what we were doing. 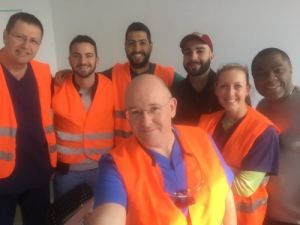 The two days flew by and I thoroughly enjoyed the work we did. It was a challenging work environment and undoubtedly took us all slightly out of our comfort zones, probably me more so than Rob & Niyi as I undertook some restorative work and that’s not normally part of my day-to-day practice! It was amazing how many of the patients really wanted to try and save as many teeth as possible and this didn’t seem to be driven by a fear of dental extractions but a genuine desire to hold on to their dentition – I wish the same could be said of some of my usual patients!

All too quickly we were on our way home and I was sad to leave. I made some new friends who I know I’ll stay in touch with and I’m glad that I made a small difference to the people I treated, all of whom were very grateful for our help.

Already I’m thinking about when I can volunteer again and despite everyday life being very busy I think I’ve come home with a clearer perspective on what is actually important and what’s not so urgent.

If you’re thinking about volunteering  – please do, I know you’ll find it as worthwhile as I did.  www.Dentaid.co.uk 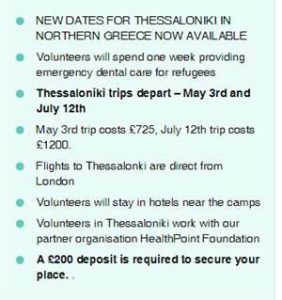